UPDATE from the rails on The Great American Whistle Stop Book Tour:4/3/2022 – Observation Car in route to Grand Junction

We pulled into Salt Lake City for a brief stop about 6AM this morning. I extricated myself as quietly as I could from the top bunk in our stateroom, so as not to rouse Jan, and came here to the observation car—entirely empty at that time—to wake up my computer and wake myself up with a cup of hot tea. 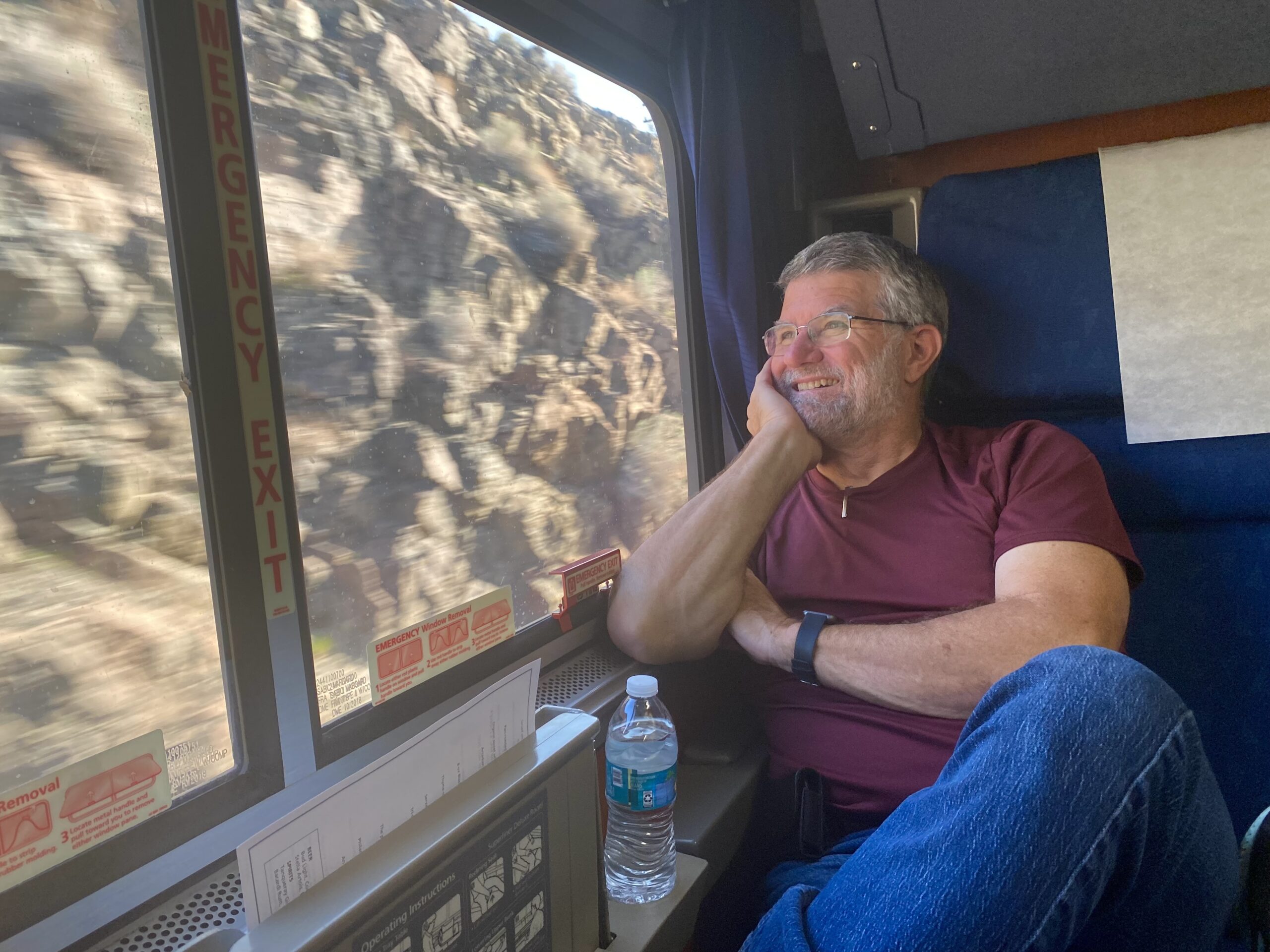 It was Jan’s birthday yesterday. We celebrated with an excellent meal in the dining car, then played several rounds of rummy as the sun went down over the Nevada desert. She clobbered me. Amtrak staterooms haven’t changed much since the last time I was in one, but there is a certain amount of reacquainting required. Where are the light switches? I thought I remembered a closet (there is one). And where the heck are the towels? Right above the sink, where they should be. Somewhere around Winnemucca we settled down to sleep. 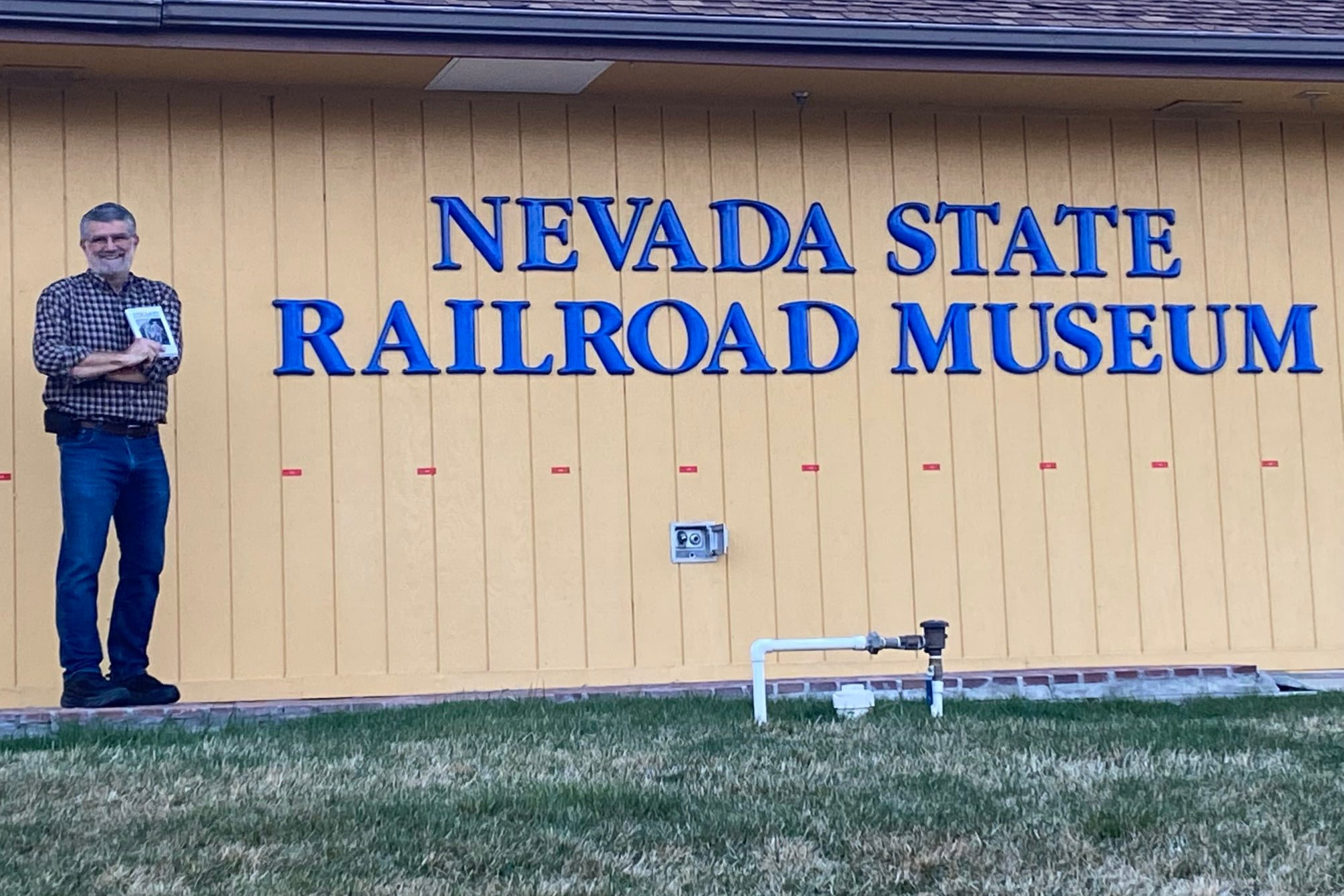 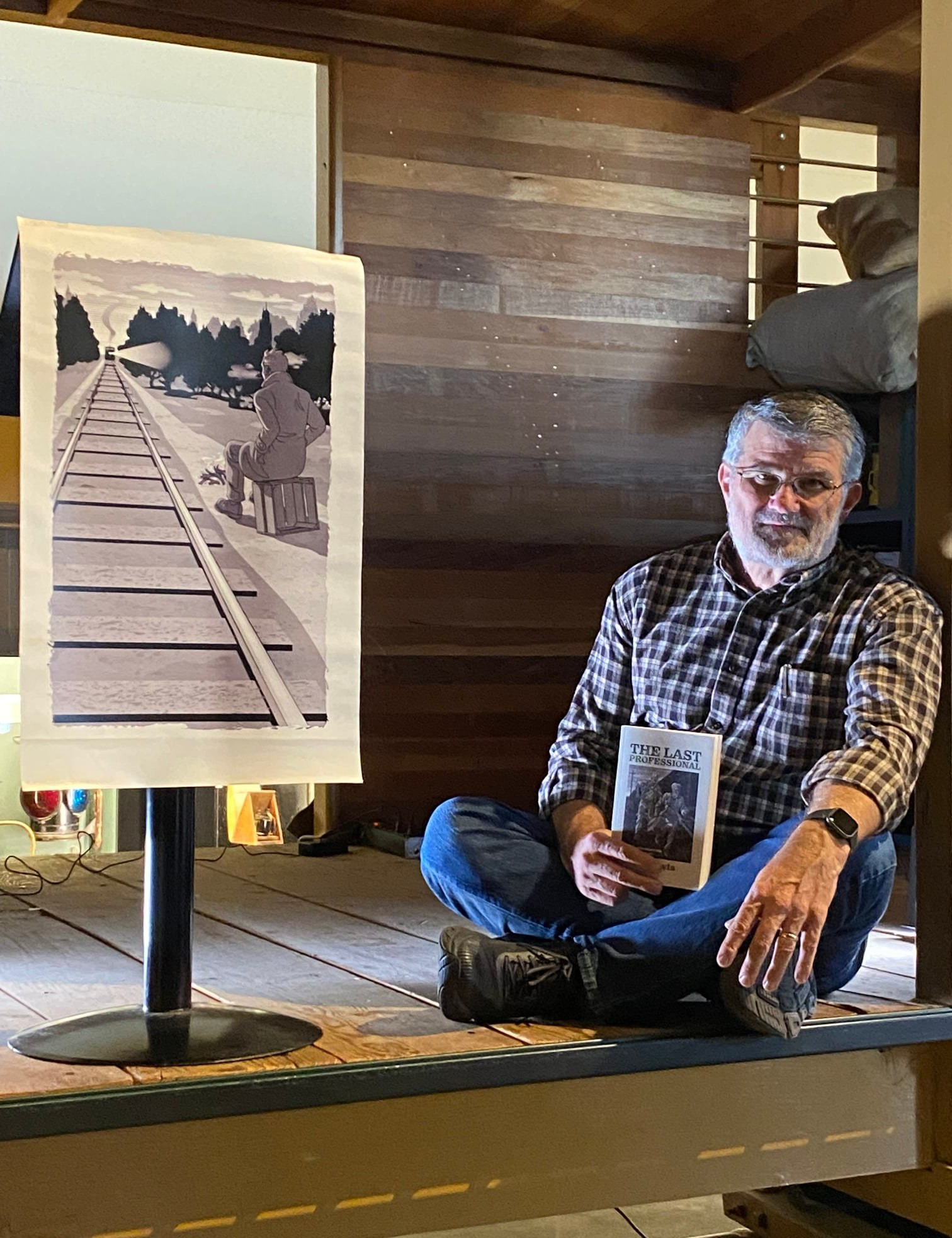 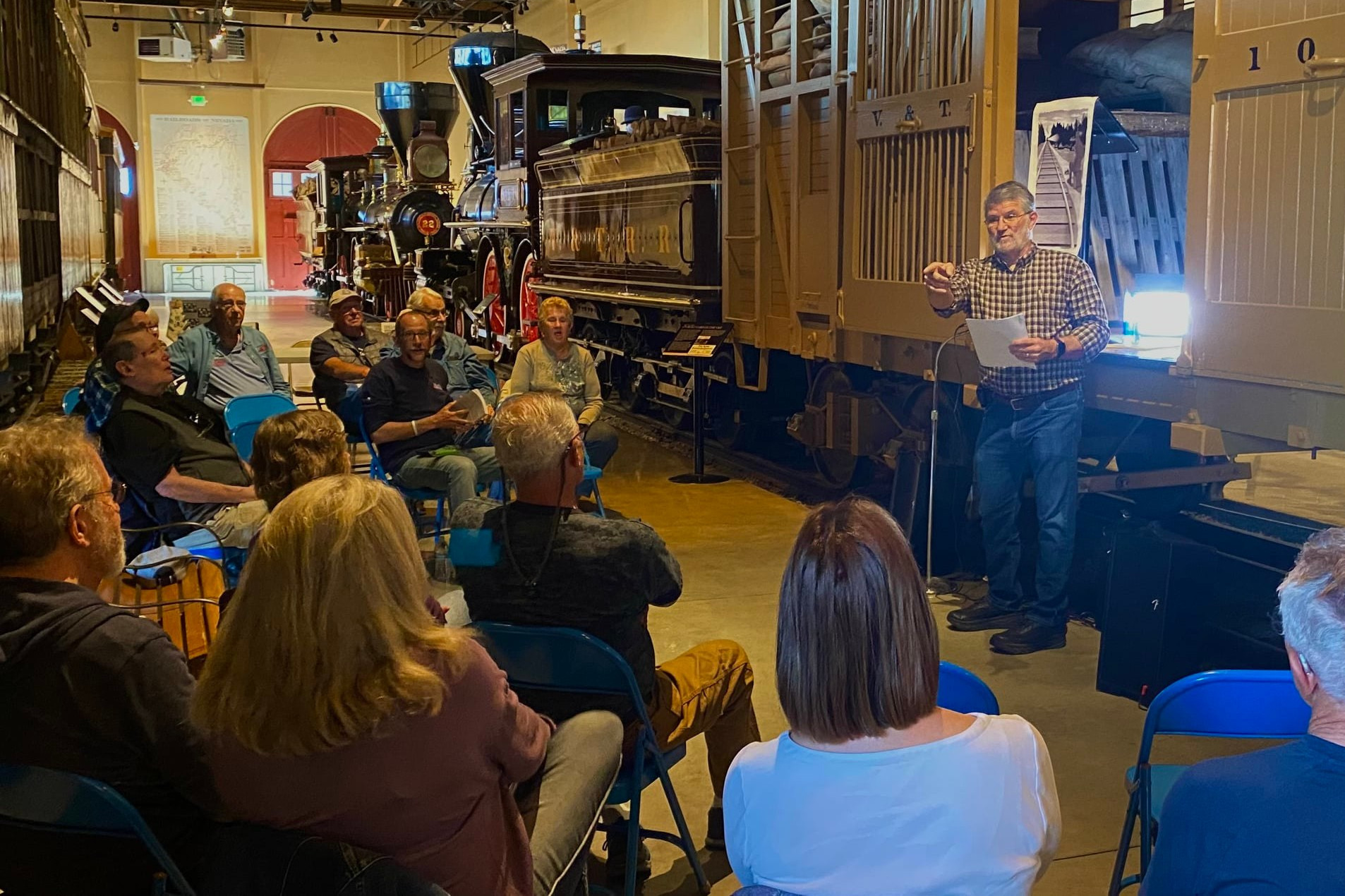 The first road event of the tour was Friday evening at The Nevada State Railroad Museum, and it could not have gone better. As one of the promotional taglines for The Last Professional says, it is a novel that that takes place . . . against a backdrop of thundering freight trains and the vagabonds who ride them . . . so when planning the tour, railroad museums seemed like a logical fit. Turns out . . . they are! The staff was wonderful. They actually set up the presentation so I could speak in front of a boxcar. The audience was very engaged, and included several folks who, like me, had ridden freights in their youth. My favorite was an old gent who goes by the moniker of Smokehouse Shag.

Most special of all, my best friend from high school and frequent freight-hopping companion, Rich Yonash, drove two hundred and fifty miles from Sebastopol to surprise me with his own personal send-off. Jan and I, Rich and his partner Victoria, went out to Reds 395 in Carson City to celebrate after the event— and we were entertained by an incredible card magician, right at our table.

There must be a healthy measure of magic associated with this whistle stop book tour. Otherwise, as unlikely and improbable as it is, the undertaking could not have come together at all. 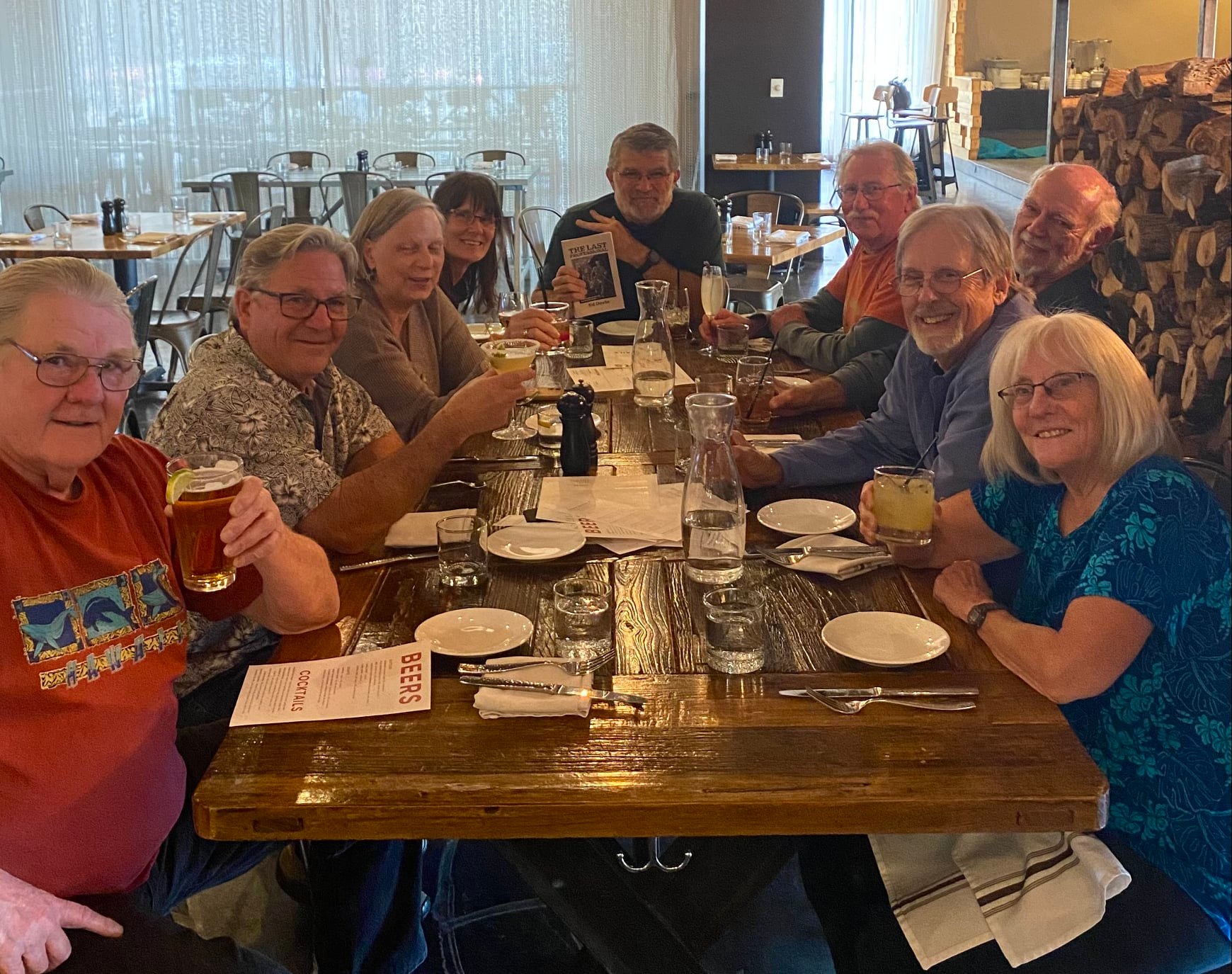 Case in point, the previous evening, while our Bon Voyage group was having dinner at the café in The Whitney Peak Hotel (The Whitney is a real treasure in Reno—no smoking, no gambling), one of them pointed at the TV and said, “Look . . . there’s Ed!” I had pre-taped an interview with the ABC affiliate in Reno, for airing on their Morning Break show. Yet there they were, repeating it on the evening broadcast, seemingly just for us. 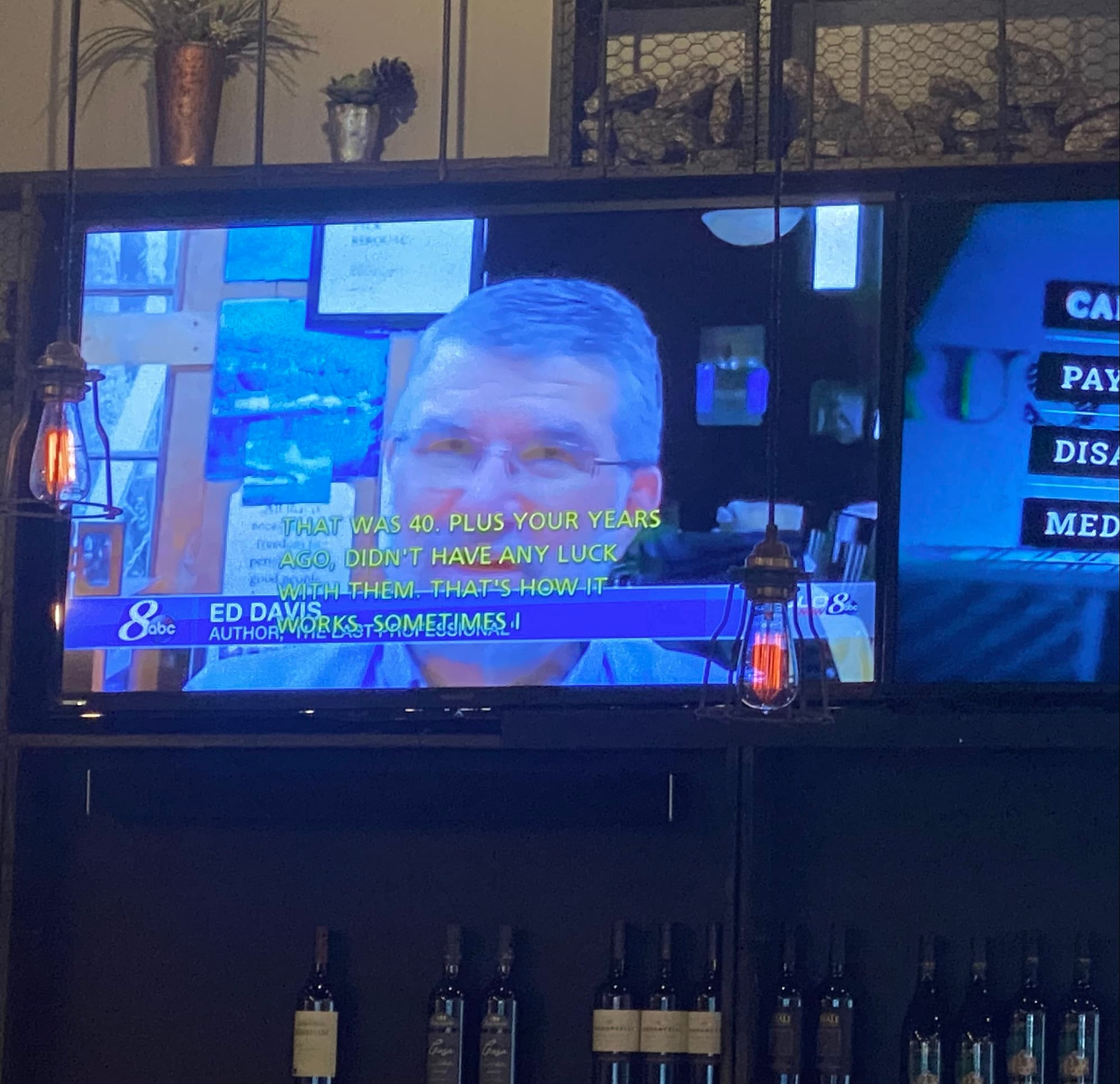