How can it all have gone by so quickly? The thousands of miles traveled, mostly by train? The hundreds of people met? The new friends made? My question is not one of regret that it is over, but of genuine wonder and appreciation. Jack London, whose Beauty Ranch is just a few miles from here, once wrote “Adventure is beyond price.” He was right. The experience of The Great American Whistle Stop Tour was priceless.

The tour was originally scheduled to end at the extraordinary La Posada Hotel in Winslow, Arizona (I can already hear you humming the Eagles song). Our stop there turned out to be everything we hoped, and then some. But it also wasn’t our last. More on that in a minute. 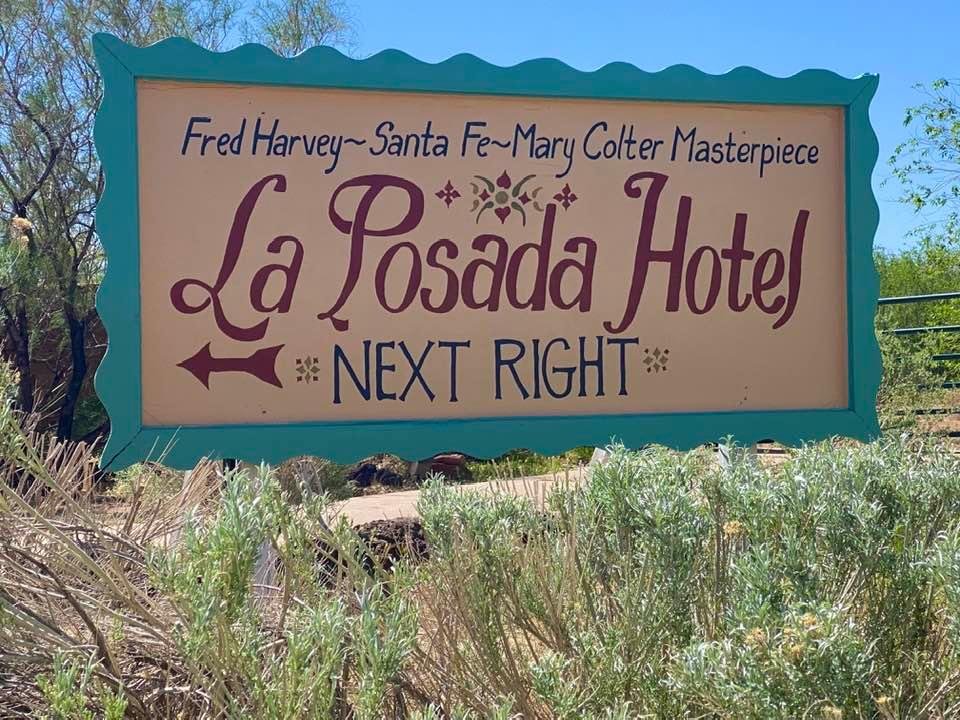 If you are ever in Winslow, yes you do need to stand on the corner and get your picture taken—the town makes the experience both fun and funny. But if your schedule allows, try to plan an overnight stay at La Posada. Our grand historic hotels are national treasures, and this one is not to be missed. Lovingly restored and maintained, it was built as Fred Harvey’s last great railroad hotel. Walking through its arched entryways and strolling in its gardens is like stepping back in time. The hotel itself is actually an Amtrak stop, so for someone who loves trains this place checks all the boxes. 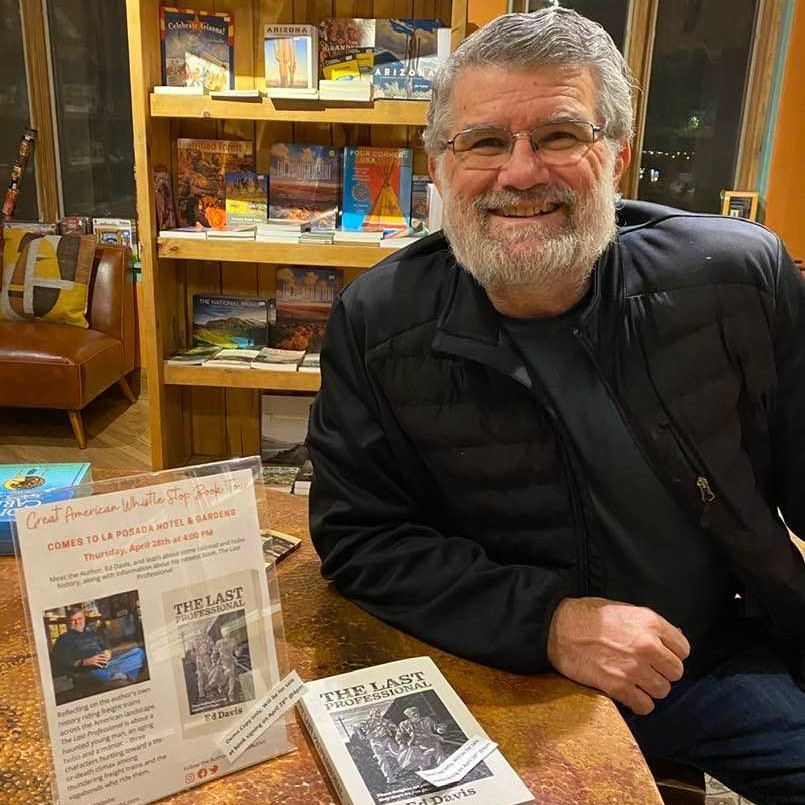 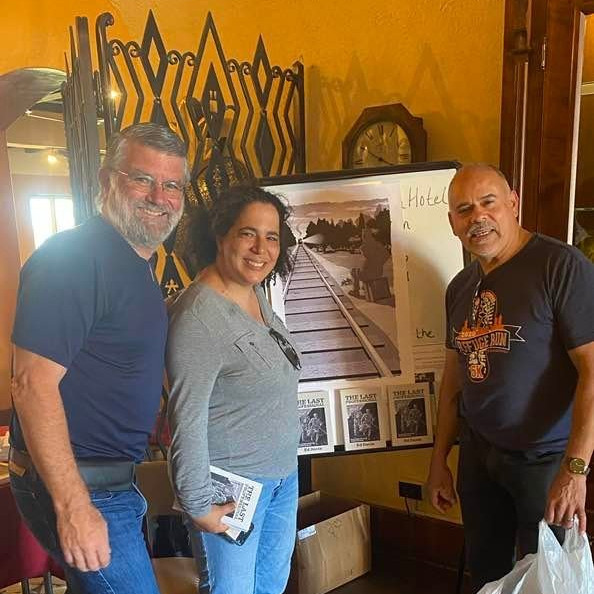 The staff could not have been more welcoming, setting up an autograph table for me right inside the hotel’s main entrance. One entire afternoon I got to sit and chat with guests from around the country and around the globe. Three couples, all dressed in motorcycle black leather, arrived on their Harleys. Others came by RV. Some by Amtrak. I got to hear their stories of travel, to tell some of my own, and to invite these fellow adventurers into the world of my novel. Because so many of them were rail fans, a book that takes place on the rails was a natural. Some folks wanted multiple copies. I was glad to oblige. 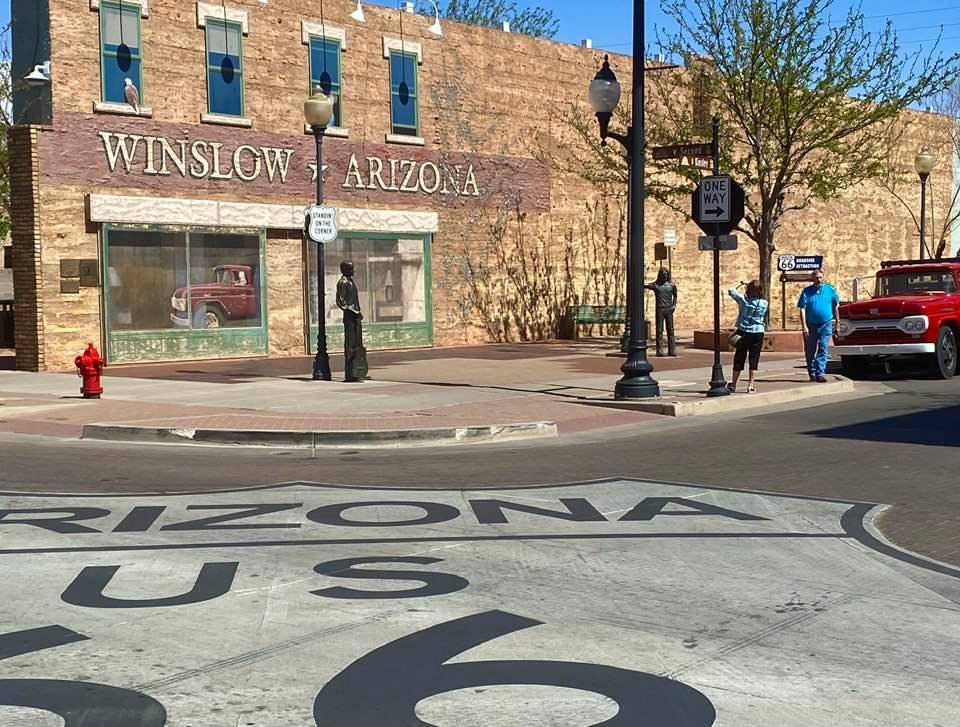 Later that afternoon I strolled down to that famous corner, but rather than stand I sat on a convenient bench, cater-corner, so I could watch the comings and goings. It’s a writer thing. Not long after an old gent sat beside me, asking first if it was okay. We got to talking. I soon learned that he was on an antique car tour of the Southwest, in caravan with half-a-dozen friends. “What are you driving?” I asked. He nodded with pride at a shining, chrome-bedecked beauty that rolled off the assembly line when Eisenhower was president. “Fifty-Seven Fairlane 500 . . . Skyliner.” He said the name as if there was magic in it, and there was. “You mean, the one with the hardtop that folds into the trunk?” I ventured, hoping I’d guessed right. His smile told me I had. “You oughta hear her go down the road,” he said. “Those big rubber tires on the asphalt make music I just can’t get enough of.”

An hour later I was sitting on the rear patio at La Posada, which fronts directly on the Winslow freight yards. A daily ballet takes place there, of switch engines shunting back and forth as they build trains, of crews changing, of signal lights blinking from red to green. Scores of freights pass through every day, some of them more than three miles long. 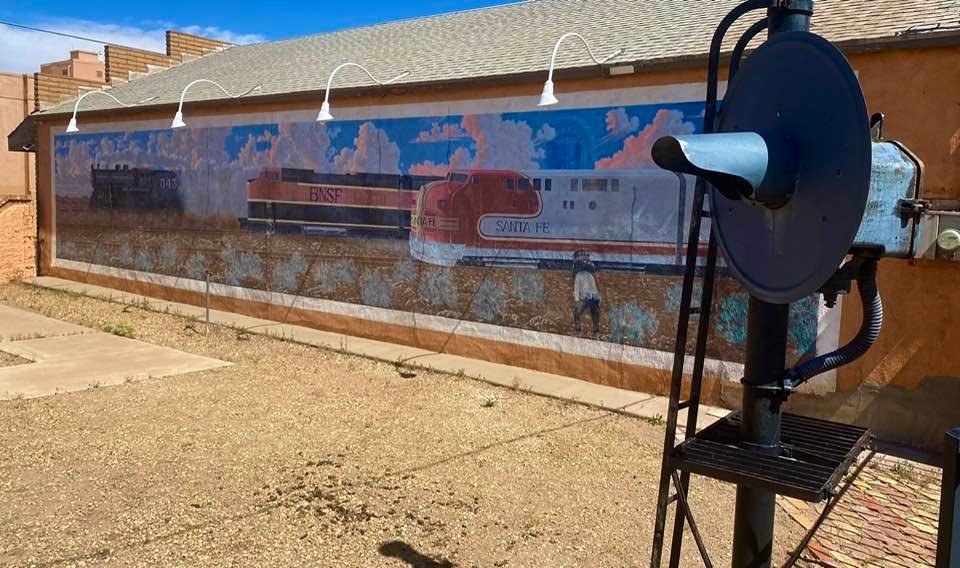 And their gigantic wheels on those steel rails make music I just can’t get enough of.

***
The hobos who rode as Profesh found a home for themselves on the rails, a place where they knew in their bones that they belonged. It is a home I visited when I could, appreciated and even admired—in spite of its hardships—for its unique embrace of freedom. A home I came to understand at least a little. But my true home, I always knew, was with Jan and our family and friends in the rolling hills and shaded hollows, among the Valley Oaks and verdant wetlands, of Sonoma County. So, part-way through the tour, when the opportunity presented itself to add one more final stop at The West County Museum in Sebastopol—the town where I grew up—I didn’t hesitate to jump at it, just as I had jumped so many moving freights in my youth.

Donna Pittman and her exceptionally dedicated crew of volunteers pulled together the ideal culmination to my month on the road. The museum is located in Sebastopol’s original train station—how perfect is that! Staged in front of the museum’s historic boxcar and railroad crossing sign, and planned to perfection, the event was part celebration, part storytelling, and a great way to raise funds for the West County Historical Society. As I talked to the dozens of folks who gathered beneath the shade trees, I was standing within sight of Sebastopol’s one-time hobo jungle, and a block from the feed store where friends and I had helped unload railroad carloads of coal when we were young enough to think that was fun. 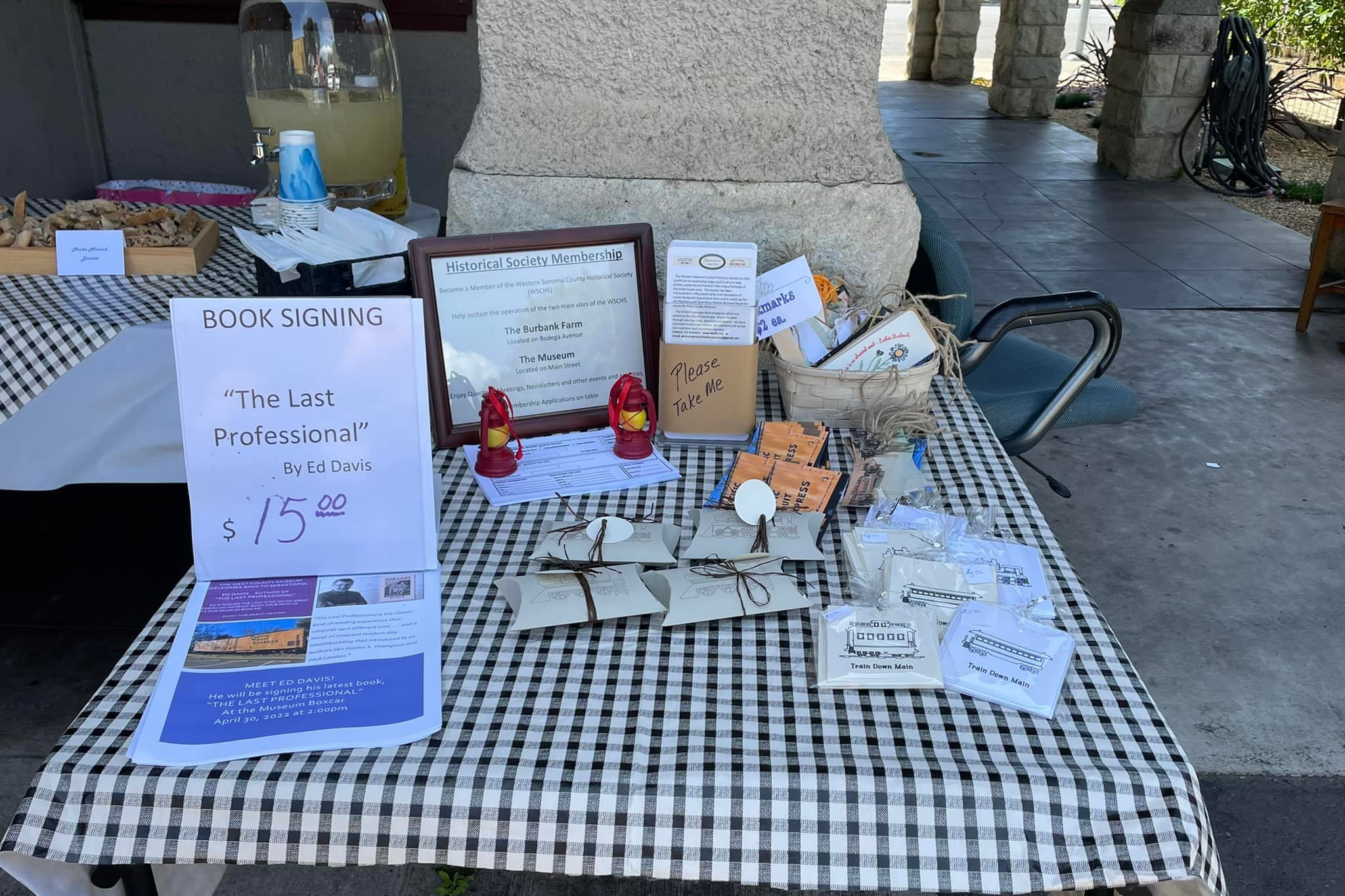 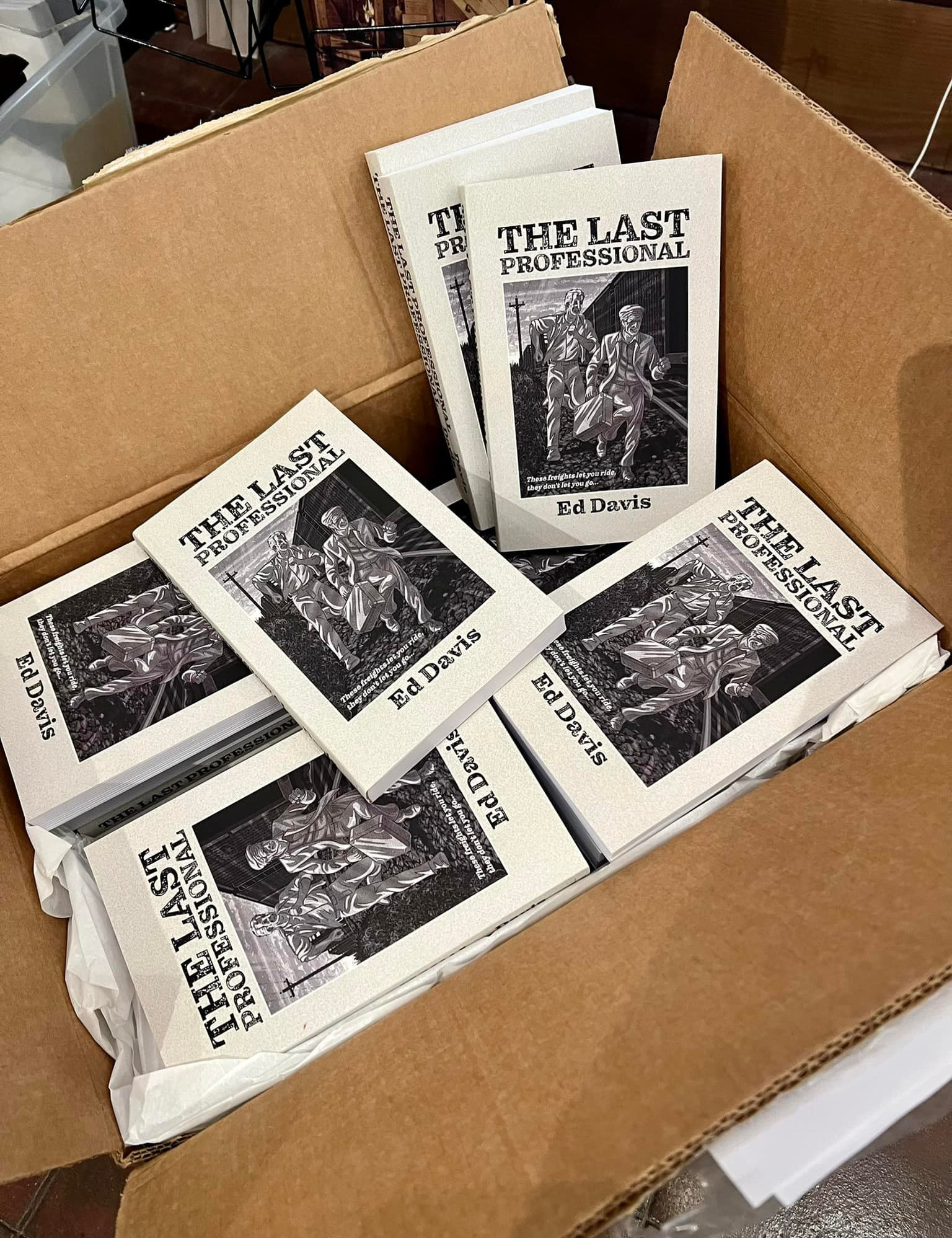 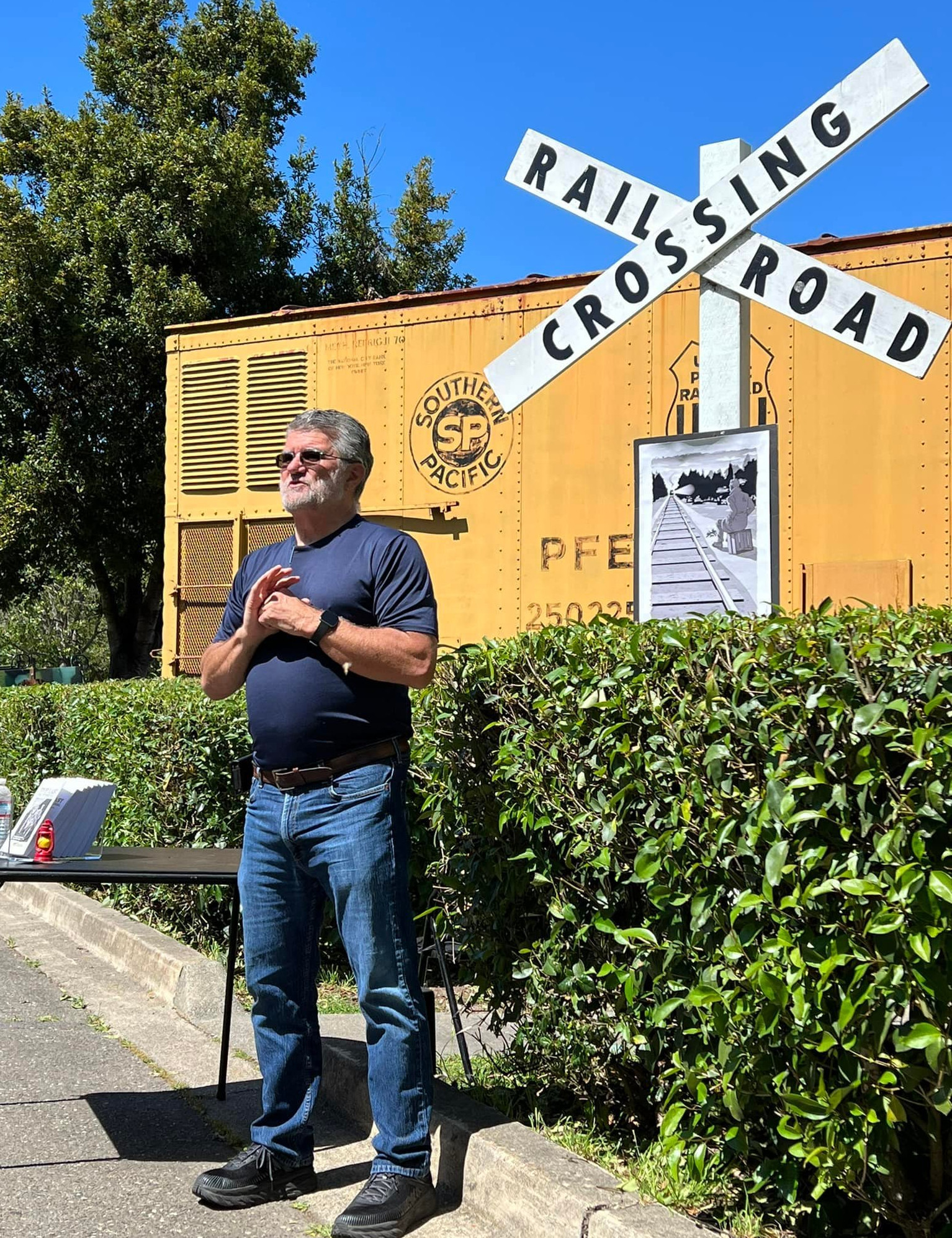 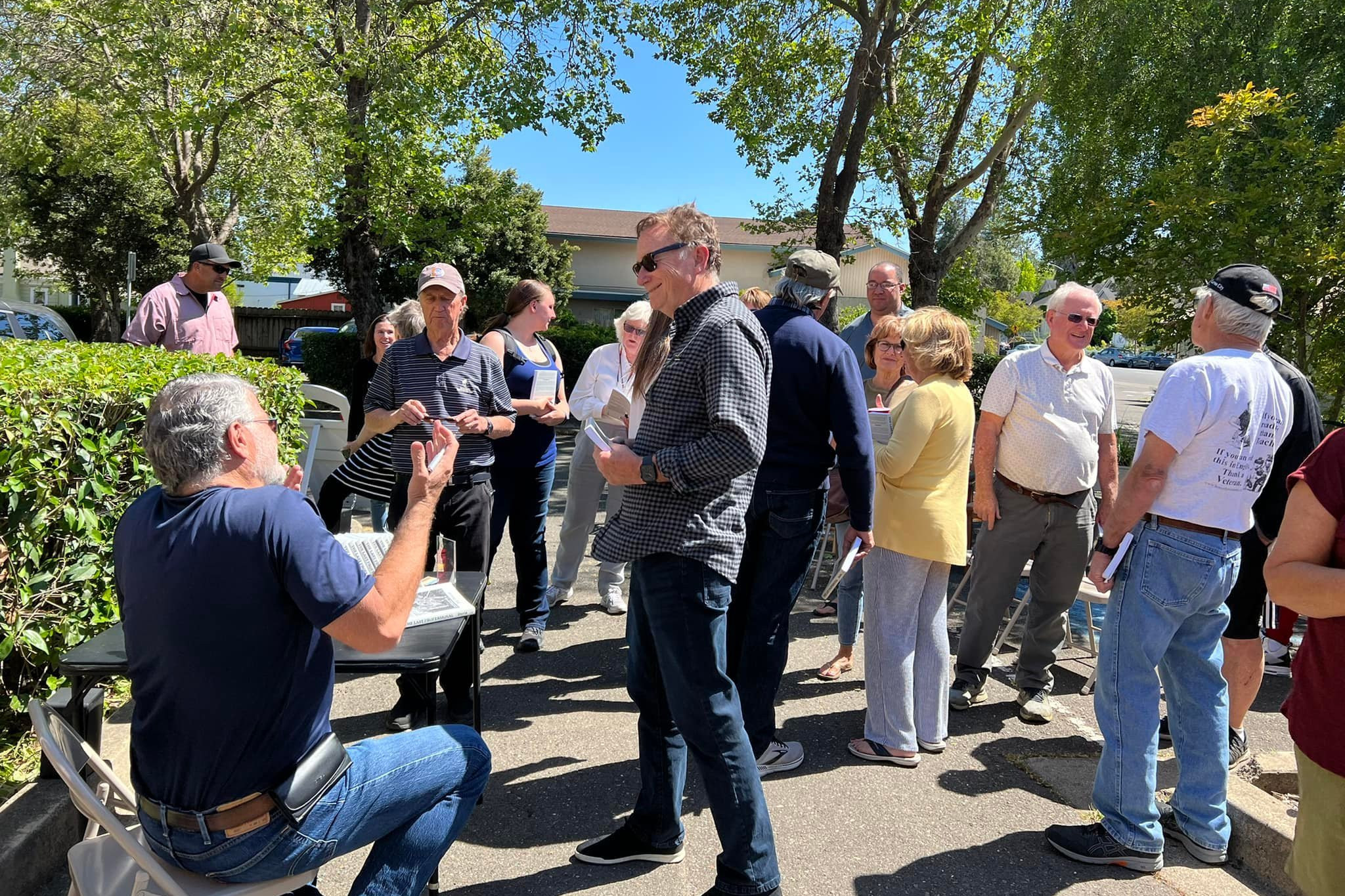 This was not just a book signing; it was a genuine homecoming. But homecoming from what? It was a book tour, of course. I can’t imagine a better one. It was a pilgrimage to the place of my birth, and to the heartland of the country that, though I left it so young, has always claimed a part of me, and me a part of it. It was me surrendering for a time, as Kerouac had, to the allure of the road. “There was nowhere to go but everywhere,” he wrote, “so just keep on rolling under the stars.”

Oh, what stars they were.

My travel collection, Road Stories, ends with a piece called The Place That We Come Back To. Here are the final lines:

This is where we live.
It’s where our children grow and our work gets done, and our evenings pass with our lovers in our arms. It’s the place that we come back to, and the place that we lose people from. And each of us understands, in a way that we seldom acknowledge but can never deny, that this place would not be the same without us, and we would not be the same without it.
This is where we live.
This is home.

It’s good to be back!